The containment measures of Covid-19 (masks, lockdowns, etc …) are taken on the basis of an alleged increase in “cases” of disease. But

in declaring that infections have increased
today there is a totally false reasoning
(devoid of scientificity, it has no connection with what is the reality of the facts).

Let’s try to clarify how this can happen.

Let’s start with an example: one day 100 “cases” are detected (these are the numbers fed by the media, which mean positive swabs). And the next day it is announced that the number of “cases” of positive individuals per day has suddenly increased to 200.

This is the method used today by institutions and the media. A modality that has no “scientific” sense in itself, since it does not describe reality at all!

today the institutions and the media,
in good faith or not,
propose completely false data.

Let’s see how this is possible.

The problem is that, out of ignorance or bad faith, a misunderstanding is created:

a false interpretation of the data is proposed
that leads people to think
that there has been a “surge” in cases of daily infections
WHEN IN REALITY THE NUMBER OF DAILY INFECTIONS
HAS REMAINED CONSTANT.

In this way, a strong sense of alarm is created, and therefore important emergency measures are justified.

The mistake (or if we mean the trick) is easy to explain.

Let’s see, for example, a situation in which the “cases” of infected were 100 per day. Suddenly they became 200 infected a day (which creates a strong sense of alarm in people’s minds).

We must first understand that those data relate to a small sample of people, which should statistically represent a factual situation only if treated with correct statistical calculations (which, in fact, is not done).

the data relating to “cases” in practice say nothing if they are not processed in a correct context of statistical calculations.

To better understand, it is as if the alarming conclusion is drawn that your car has an engine problem because today it consumed more petrol than the previous day. Without framing that data in the other significant data that can actually lead to such a conclusion: firstly how many kilometers the car has traveled.

From the scientific point of view

the data we have available are not in themselves “real data”:

they can represent an actual reality only if they are elaborated by calculations that take into account other important factors of the context.

Taking the example of Covid-19 infections, we see that the mistake made is to consider the data that are reported detached from the context in which they are taken and to consider them as if they were real data.

But the data are of two types, radically different from each other:

● the absolute data: for example in the case in which in a nation of 10 million people a swab is made to all inhabitants, 1 million positive cases emerge. In this case we can rationally (scientifically) say that that number of one million actually represents real positive cases.

And if the next day 2 million cases emerge, we can legitimately (scientifically) say that in one day the cases have actually doubled.

● the data relating to the analysis of only a part of the population (a sample) that do not represent a fact in themselves, but are only abstract numbers. And then by reasoning about them – as we do now – we make the typical mistakes of children who try to learn mathematics.

In order for reasoning to be made on such “relative” data, it is therefore necessary that these numbers be transformed into “real data”: in absolute numbers, which represent an effective population.

The problem that occurs today in the case of the analysis of the spread of Covid is that, paradoxically, by reasoning on such non-contextualized data, one can make sensational errors such as the one we are now witnessing at the media level:

seeing an increase in “relative” numbers,
it is thought that the actual cases of positivity in the population have increased,
when instead the actual number of positive individuals is the same.

Of course, this consideration may appear pretext, forced, demagogic. But this is indeed (scientifically) so, as is illustrated in the next chapter.

More specifically, the problem is that if from a survey on a sample it emerges that there are 100 positive cases,

In fact, if we contextualize the result of the first sample, the (“real”) fact emerges that there are 10% infected in the population analyzed.

And so if the next day I double the number of people taken as a sample and have double the “cases” (200), it means that there has been no growth in the spread of the Virus: in fact

In other words, the 100 “new” cases actually existed the previous day, only they could only emerge when the number of tampons was increased.

The problem relating to the Covid-19 issue
is that therefore
we continue to be alarmed because incomplete
(not contextualized) data is passed on
to actual data, for reality.

And of course we come to totally wrong conclusions. And consequently to an unjustified sense of alarm, and to the application of the strong repressive measures applied in 2020.

In that case we do exactly as in the case in which the wrong conclusion of the increase in car consumption is drawn, since other significant data of the context are not taken into account.

Just think that a car salesman can leverage the idea that the car is broken, and sell us a new one.

See below for the example of the graph based on institutional data, in which the yellow bars are the swabs, and the blue line represents the growth in the number of infected. The growth is only apparent, since if the number of positive cases is compared to the number of swabs performed, the percentage of the infected population is always the same. 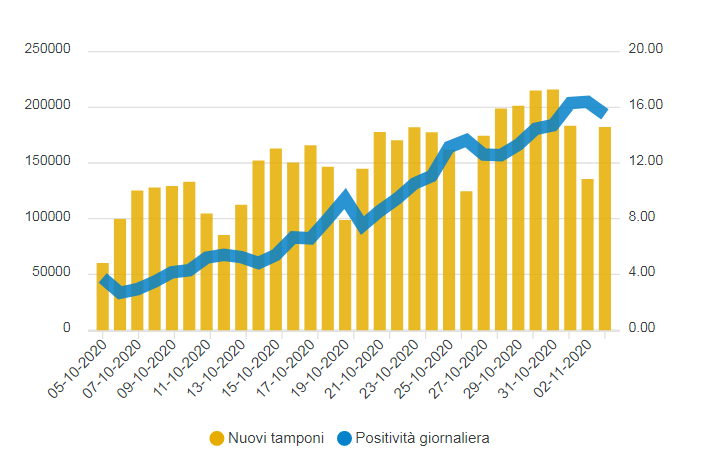 How to correct the problem?

To correct the problem, you must first understand the cause.

Macchiavelli – and others – said that if there is a scammer it is because there are people who want to be scammed (otherwise the scammed people after a while would begin to understand the simple mental trick to which they are subjected).

The basic problem is that, in fact, today people are subjected to a sort of Psycho-regime in which people have undergone a sort of mental “training” that leads them not to be able to distinguish the real world from the imaginary world. painted by the Institutions and the Media (this is due to decades of School education which proposes a “rewritten” Culture on the basis of Ideologies; and to the Mainstream media which profits from the dissemination of a pure narrative).

<see “The novelty of modern empires: the psychological dictatorship (Ideology)”>

<see my text “The strategies of manipulation of consciences “>

The fact is that we live in a Democracy, which basically works on the Consensus of the People (although the Rulers are today able to govern regardless of the consent of the Citizens, in fact, if the whole People took away their consent, they would not would be more able to govern).

<see my text “How and why this transformation of the Government of Western democracy took place (beyond panem and circenses: emergency government)“>

The problem arises from the fact that

for Democracy to actually work,
consent must be a “conscious consent”.

That is, the Citizen, in order to choose capable and honest Rulers, must be correctly informed of what happens in the Society. Otherwise, Democracy turns into a demagogic regime, a form of a mental (“cultural”) dictatorship, in fact.

<see “How is it possible to get out of this new form of dictatorship?“>