Today it is therefore necessary to consider the implementation of a new way of reforming Democracy – to bring it back to its original dimension. A new modality that operates outside the field of “Politics”.

That is, in this historical phase

it is necessary to abandon
what is defined as Right (or republican) Politics,
to move to a new modality of democratic Politics.

Let’s see below what this means.

This new path consists of

a recovery of the original “Politics” of Democracy:
NO MORE A POLICY OF “LEADER” AND “EXPERTS”,
BUT A POLICY “BY THE PEOPLE”.

real democracy cannot be achieved
through a top-down process

That is, you cannot get out of Social Democracy using the same methods as the latter.

This means upstream of all the recovery of the Policy in its original meaning.

“The title of Politics literally means” the things concerning the polis “, and is the origin of the modern English word politics” [Wikipedia “Politics (Aristotle)”]

According to Aristotle ” ‘politics’ meant the administration of the ‘polis’ for the good of all, the determination of a public space in which all Citizens participate.” [Wikidpedia “Politics”]

Politics is therefore originally linked
to the Polis (Town):
that is, it consists in
the administration by the inhabitants of their Town.

Note that in a Democracy the “State” (in its present conception) just does not exist. Recall that when the monarchy became “absolute” the King said “I am the State”. Today the rulers think “we are the state”: it is another of “absolute regime”.

in Democracy “the State are the Citizens”

(the constitutions establish in fact that the Citizens are the Sovereigns).

▫The democratic way to the recovery of real Democracy: the levels of the New Politics

● ▫New Politics at the level of “Citizens’ (bottom-up) Politics”

To be able to restore real Democracy, it is therefore first of all to recover a Democratic dimension (already in the early stages of the change process). This means overturning the current conception of politics. Or

It is not a question of defining new political lines, but of giving Citizens the tools to develop their Policies.

In other words, it is a question of letting the new policies be defined from below.

If you think this is not possible, then simply

1) the history of man is unknown:

2) it was understood what Democracy is;

3) one is influenced by socialist ideology.

The new approach also overturns the concept of politics:

2) where today the most important part of Government (and Politics) is developed at a National (or State) level, in the new course priority is given to the “bottom” level, to local administration, where citizens can genuinely democratic participate in government.

In other words, in the new approach, Politics is recovered in its original sense: that is, Citizens resume administering their local territory.

As illustrated in other documents, the supra-local level of Government (of Politics) is an invention of Democratic Socialism.

today, thanks to new technologies,
it is possible to develop forms of participatory government
that were impossible at the foundation of modern democracy..

In other words, it is currently possible to overcome the physical limitation that existed up to the 1990s which in fact prevented citizens from participating in levels of government that are higher than the local level.

Obviously, in order to develop effective participation of citizens at a supra-local level, it is necessary to define new models of participatory Government (functional to new technologies), which is precisely what is done in the Bottom-up Reform Initiative. <see my text “Introduction to the Project Bottom-up Reform Initiative: the path of involvement of the Citizens“>

Direct Representation is an indispensable mode of compromise during the transition phase between the current purely representative Democracy to the real Democracy, in which citizens can exercise their sovereignty more effectively.

But the R Bottom-up Reform Initiative illustrates how it is possible to operate effectively (with a Government by the People) at the supra-local level, using forms of government that go beyond the current model of representation: for example with a Government by delegations.

● The New Politics at the level of the current Politics

1) At the level of the new “Citizens Policy” mentioned above – that is, for the administration of social issues in the local area, which extends upwards (the only form of Politics that allows the development of a real Democracy) .

To be able to operate at this level, it is necessary to offer citizens:

A. new operating methods for the activity of direct participation in government (this aspect should be the least problematic in the USA, since this type of government is still developed in small towns; the problem exists in large cities, where it is necessary to bring – adapting it – the current Town government system).

B. tools for the aggregation of citizens into “working groups”: these are “Social Networks” dedicated to the development of Citizens’ Policies. <see my article “Introduction to the Open Government Platform project“>

In the new bottom-up policy path, the contents of the policies are not defined a priori, but tools are offered with which the contents can be developed – place by place, moment by moment – by Citizens. And with an extension of the functionalities, Citizens can develop actions to contrast the policies of the Left even at the supra-local level (see next point).

The new approach also makes it possible
to interact with the institutional policy.
But in completely different ways
than the current ones.

Current political leaders can enjoy new gratifications – even the most selfish ones – greater than those obtained with the current institutional policy.

This is because it is a question of developing an epochal change – a refounding of real Democracy – and not just a correction of Social Democracy as Reagan and Trump tried to do (who, despite having developed reform strategies “from within” the Institutions, have not been able to interrupt the path of “revolution” of the Socialists).

The differences between current and new politics

The substantial difference between the two forms of Politics is that in New Politics:

● the policies are developed from outside the current institutional Politics (in a way that is absolutely independent of the institutions, from which there is no attempt to obtain neither permission nor support)

– development methods of new policies are defined which are purely legal: to achieve this, the spaces of freedom not yet “revolutionized” by Social-democratic policies are exploited to the maximum. And

– Citizens are provided with Social Networks for the development of Citizens’ policies that give the People a new de facto power (described in other points).

● these policies are much more effective than the current ones: as Trump showed during his tenure, despite being one of the most capable characters, he was unable to carry out any “drain the swamp” (some examples: after the lessons of 2020 ‘FBI has sent agents to threaten witnesses of fraud; the Supreme Court and DOJ say there are no layers of fraud, and that Dominion’s stations cannot be seized; Fox News lies daily about election fraud; Social networks allow themselves to say that after Biden takes office Trump accounts will be deleted).

This entry is part 2 of 4 in the series ► I.a_New Politics manifesto

As mentioned in other articles, today Western Democracy has been transformed into a form of Socialism to the point that it is […]

This entry is part 3 of 4 in the series ► I.a_New Politics manifesto

Summarizing what has been said in the previous articles, if you really want to bring Democracy back to its original dimension in […] 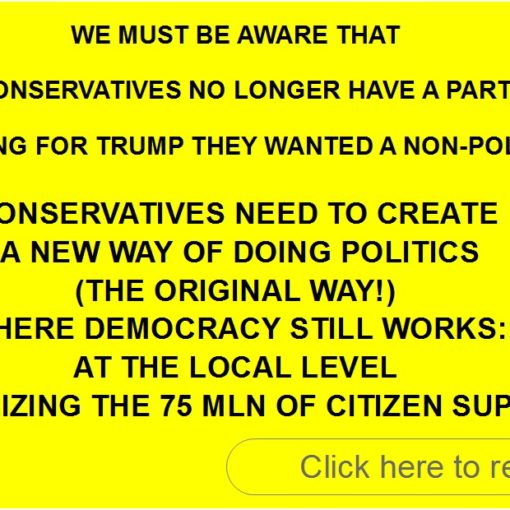 Conservatives are unaware that they are reduced to chasing the traps of the Left, continuing to be inexorably defeated