“If repeated attempts to change a system fail, it means that there are errors in the principles [of your action].”

The basic error that is committed is subtle, devious: one moves by reasoning in the way that they have been taught by the institutions themselves.

That is, today we think

we are not able to look after ourselves,
and therefore having to resort
to the guidance of better people than us.

The first consequence of this is that most people think that their problems can only be solved by the institutions. When, on the other hand, the latter are the ones that, following their own interests, are the cause of these problems.

One of the causes of this condition is that we have forgotten the meaning (of the functioning) of Democracy, which is nothing more than the formalization of the system used for millennia by man to manage human communities in the best possible way.

This unawareness has overturned, in fact, the idea that man has of himself: today the human being thinks he has to be “commanded” by other human beings in order to live his own life.

The problem that allows the development of authoritarian government institutions is:

►that Citizens expect solutions to their problems from above (which, paradoxically, are often caused by the institutions themselves).

► for citizens to act personally to rebuild a sustainable (happy) dimension of life.

It is therefore a question of reconstructing what has been destroyed by decades of a top-down imposed pseudo-democratic regime.

● At the information level: radically innovating a “dissident” innovation that is losing because it uses obsolete forms of communication. <see my Article”An elementary (reassuring) approach of “dissident information“>.

In a subsequent time it will be necessary to

● develop a new Government structure independent from the institutional Government to rebuild a real Democracy and definitively neutralize the initiatives of the current Policy. <see my Article “Beyond top-down “Democracy”: crowdisation of Governance“>

In order to restore the conditions of real democracy – of a good quality of social life – it is therefore necessary to act to radically change the current cultural and political conditions.

1. by changing our mindset, to recover the one that for millennia has allowed human beings to base themselves on themselves.

2. restructure the forms of government and administration of the territory to recover the dimension of real Democracy (government “by the People”).

∙1. recover the mentality of man capable of looking after himself

The historical novelty is that today the measures that harm the citizens are supported by the citizens themselves (indeed, the citizens “aligned” with the Government fight the other citizens who try to restore the truth).

It is therefore essentially a cultural problem (a psychological problem), and not a problem of forces in the field (legislators, courts, police forces, etc …).

For this reason it is necessary to act at the level of information, first of all by recovering that way of seeing the world (our Society), and of reasoning that we have lost.

The problem is that

● today we are used to thinking that there are leaders (politicians), experts who, for our good, have to decide for us

● Today’s experts are no longer true experts, for at least two reasons:

– they support partisan interests, therefore their opinions are not scientific, but they are “political”.

– the experts who work for the institutions are no longer experts in anything: thanks to an “reverse meritocracy” that for decades has selected yes men. and not people with real knowledge (truly intelligent people would not stoop to saying things without scientific validity).

The underlying problem is therefore the current mindset that has been instilled in us in decades of education and media information based on ideological dogmas (“knowledge” today is no longer knowledge, but it is Ideology).

This mindset leads to today’s condition: most people think they are no longer able to manage their lives on a social level (in the organization of the territory); but also on an individual, private level (for example, it relies on educators and psychologists for the education of children).

The fact, in essence, is that due to this mindset, citizens have lost the ability that human communities had for millennia (which still exists in small towns in the USA) to personally manage public services and infrastructures on the local territory.

2. Rebuilding the information and governance systems of Democracy

Today it is not possible to fight – even to defend oneself – the government institutions, since they have reached a position of almost absolute domination.

The problem is that today we protest, we hysterically try to be heard by the institutions (we try to interact with them in some way).

But all this is useless, since the institutions will never have any intention of “listening”: on the contrary they use attempts to make ourselves heard to strengthen their position, condemning, repressing.

This happens precisely because:

– the Institutions develop initiatives that harm citizens not for a mistake, but with a purpose (there are those who do it for ideology, some for money or fame).

– the institutions have reached a level of absolute power, so they can act as they want regardless of the laws and the Constitution.

In order to effectively improve things, it is therefore necessary first of all to solve the problem of people’s mentality: it is necessary to begin to understand that human beings for millennia have not needed to be guided from above (it should be borne in mind that even in great empires like the Roman one left full freedom to the local communities to manage things according to their customs and their laws).

So at the base of the current problems there is a “cultural question”: it is possible to improve things only when citizens understand that they are able to take care of themselves, with the help of other citizens, but without having to be guided from above. That is, when it is understood that

things can actually be improved only when citizens begin to stop expecting to be led by the institutions, and begin to act directly.

The initiatives described here serve, among other things, to develop this awareness through a learning by doing process.

As illustrated in the following articles, it is necessary to operate on several levels:

► Information innovation: this is a crucial aspect, because only an informed citizen is able to understand what is happening. And therefore to understand how to act effectively.

(one of the problems is the hostility of the majority of people towards “dissident” thinking: only good information can lead them to understand the meaning of what they are told).

today dissident information uses obsolete forms of communication that will never allow it to have effective results.

And therefore only by radically innovating Informazione will it be possible to have effective results.

► Bottom-up Initiatives to strengthen the position of “dissidents”

These are initiatives in which the Crowd organizes itself to develop scientific research initiatives directly on the territory that allow to illustrate the critical situations hidden by the institutions (such as surveys on the pollution of the territory ). Or the creation of working groups that analyze the data available today to develop new statistics able to clarify the manipulation of information implemented by the Institutions.

Among these initiatives is the public debate – a Scientific challenge – which allows the real truth to emerge. It is an online platform in which a comparison is developed between institutional information and dissident information which, being conducted with strictly scientific rules, and having the participation of people whose authority is indicated, the actual truth emerges. <see my text “Bottom-up Initiatives to strengthen the position of “dissidents”“>

■ Possible actions in the medium term (to restore real Democracy)

Democracy is not an ideological invention, it is simply the formalization of a spontaneous (and functioning) way of managing the human community for millennia. <see my text “The Society of Man is a discovery and not an invention“>

And the mechanisms of Democracy cannot be altered without creating catastrophic consequences.

It is therefore necessary to regain awareness of these mechanisms. And therefore to develop a new Government structure independent from the institutional Government that allows to rebuild a real Democracy, and to definitively neutralize the initiatives of the current Politics. <see my Article “Beyond top-down “Democracy”: crowdisation of Governance“>

It is an online platform that allows the development of a government “by the People”.

This type of initiative is illustrated in many of my works:

– ‘Introduction to the Project BOTTOM-UP REFORM INITIATIVE: the path of involvement of the Citizens

∙I.e.1 – Dissident Information (and Politics), what to do now: the need to redefine strategies -libro

This entry is part 1 of 4 in the series ► I.a_New Politics manifesto

The question is that today we continue to circle around the problem without centering it in its essence. That is, today we […]

This entry is part 1 of 3 in the series ► I.b_Democracy reboot - Intros

This entry is part 4 of 4 in the series ► I.a_New Politics manifesto 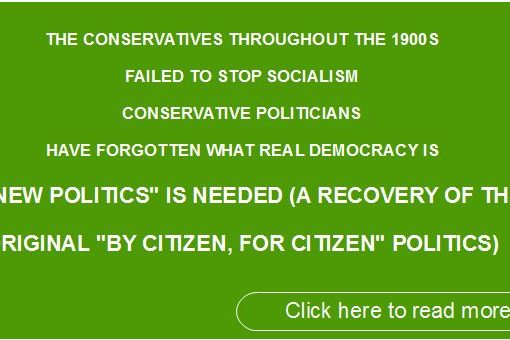