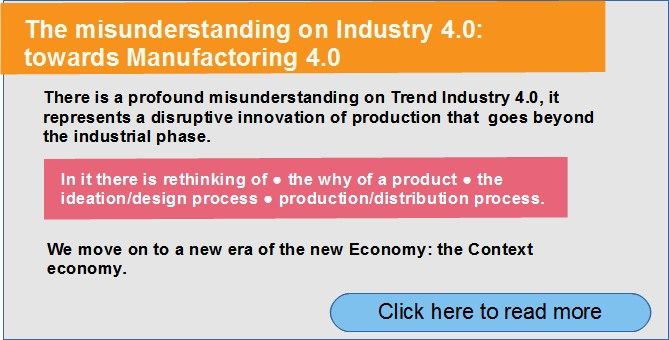 Today, in a moment of rapid and radical changes, there is the risk of interpreting the emerging trends – which are decisive for the success of the Market and Governance strategies – with an obsolete mindset.

It is necessary to clarify some fundamental misunderstandings regarding Industry 4.0:

● the change concerns not only the product, but everything connected to it. Today it is necessary:

– a rethinking of the why of a product

– a rethinking of the ideation/design process

– a rethinking of the production/distribution process

● Disruptive Innovation is not based on technology: rather, going “beyond technology”.

< see “The role of technologies in innovation” >

The “revolution” (dirsruption) that is transforming the world of production

is a phenomenon radically different
from the one today defined as Industry 4.0.

In the post ”Innovation in the new post-industrial Market – Manufactory 4.0″ <see> we illustrate how we should rather define the new trend with the term Manufacturing 4.0.

In other words, Industry 4.0 is not an improvement of the Industry dimension, but a disruptive innovation of production that goes beyond the industrial phase.

The fact is that today

The new “machineries” (smart, based on the “Makers” methodology, and on desktop devices connected via internet) are extremely versatile and can quickly be adapted to new productions, simply by changing the software that manages them, and some accessories. And they can be used by unskilled personnel (they can be programmed by downloading files from the Web, and there may be remote support from experienced personnel).

It is even possible to install temporary production workshops, taking advantage of the availability of “warehouses” no longer used by the traditional Industry (the machines can also be hired).

In the new industrial revolution towards Manufacturing 4.0, we move on to a new era of the new Economy: the Context economy.

It represents a mode of production and “consumption” that is completely different from the current one, in which the market no longer develops in terms of mass. In the Era Manufacturing 4.0 the products will be mostly “taylor made” (it goes beyond the customization): the Crowd enters the design and production phase (up to the Open Factories).

< see “New modalities of Production of Services and material Products” >

An example of the new post-industrial era is the Model identified by INNOVA, that of the Franchising-Transplant Factories that represent a (remarkable) evolution of the Transplant Factories: factories of the size of workshops that produce under license with radically new methods .

The potential of the basic qualities of the Fab Labs

<see Towards a radically new model of Industry 4.0: introduction to a Smart Fabrication plan >

If the Fab Labs have no future (they are used solely to gather support and funding from the Public Administration, and the Foundations), they probably represent the best chance to develop new forms of production functional to the new Demand.

This Article illustrates, precisely, how an evolution of the FabLabs (here defined as SmartFAB) is actually a response to the current pseudo-innovation of Industry 4.0.

The production method “Industry 4.0” is, in fact, one of those forms of pseudo-innovation created by the incumbents (managers and Consultants) in order to survive the recession.

From the Fab Labs can be born
Smart Manufacturing (Smart Fabrication) forms
who have the necessary qualities
to define winning strategies in the nascent market.