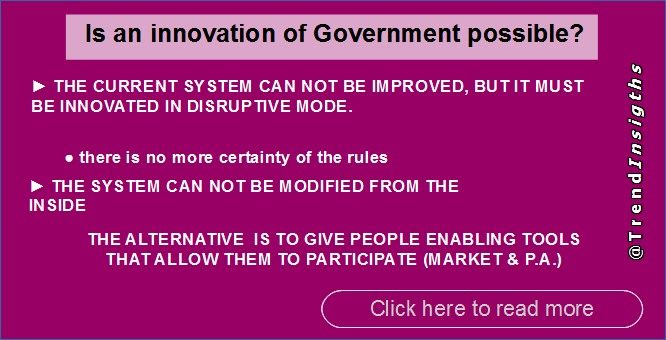 There are two misunderstandings about an improving of the Society and Market system:

1) THE CURRENT SYSTEM CAN NOT BE IMPROVED, BUT IT MUST BE INNOVATED IN DISRUPTIVE MODE. it is not a question of corruption, that is, of “bad guys”, but

A. THE CURRENT MARKET & SOCIETY SYSTEM THAT DOES NOT WORK BY ITSELF (it has a “factory defect”).

The System should be a Democracy, in which the Customers “reward” a product with their choice (weakening the other products); and they, as citizens, “reward” electoral candidates by choosing those who can best develop solutions for their needs (who can use their money better).

The fact is that today we live in a dimension of Crony capitalism, the cheat that kind of system (it is no longer at the service of people, so people cease to make their fundamental contribution to the functioning of a democratic system).

The real problem of this is that this mode irrevocably puts in crisis not only people (Citizens/Customer are impoverished because they are induced to continuously buy products that cease to work after a short time, and have to pay increasingly expensive taxes; they are also not satisfied in their needs). But it also puts the “System” (Market & Society) in crisis because the phases of recession occur, and the Market Players are no longer able to sell. And the Politics Players lose their electoral consent.

B. THERE IS NO MORE CERTAINTY OF THE RULES: either because the Governors continually produce “crony-Laws” that favor the incumbens (thus preventing the development of real innovation). And the courts end up producing arbitrary sentences (according to ideological interests, or other).

< see Why “Politics of Parties” and participatory politics are incompatible>

The current Society & Market System is “armored”: it can not be changed because (a) Market and Business integration prevents any attempt at real change (b) lack of awareness on the part of people both of what is happening and of the possibilities for change.

<see Why Policies 2.0: the current government system is armored>

A system of this type will never allow the status quo to be changed. But

this system weakens more and more,
because current policies lead to recession,
which puts Citizens/Consumers in a condition of growing frustration

for their impoverishment, and for the lack of satisfaction of their most important needs (it is not adopted here the point of view of Marxism, but we simply speaks of Disruptive innovation).

● [Government] participate in a direct way to the administration of the territory (as is still the case for many Towns in the USA). And

<see The problems of the current Market: strategies: toward a crowd participated Marketing  >